The Carroll Phillips Bassett Prize is awarded annually to senior students deemed most outstanding by the Department of Civil and Environmental Engineering. 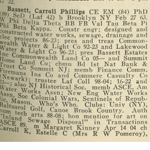 Background on Carroll Phillips Bassett:  Mr. Bassett graduated from the Newark Academy, and entered Lafayette College in 1879, being graduated as valedictorian of the class of 1883, with the degree of Civil Engineer. Pursuing his studies in a post-graduate course, he had the degree of Mining Engineer conferred upon him in 1884 by the same institution, which also honored him with the degree of Doctor of Philosophy in 1888.

Mr. Bassett is an author of considerable note in the profession with which he Is identified, and among the numerous technical papers he has contributed to the literature of this field are the following:”The Conservation of Streams,” “Inland Sewage Disposal,” and many others. For a long time he has been a regular lecturer on hydraulics and sanitation at the University of New York, and at Lafayette College, and he is consulting engineer for a number of water companies.

The award recipients  for the Carroll Phillips Bassett Prize are:

Awarded annually for outstanding work up to and including the junior year.

Our Pulse Our People